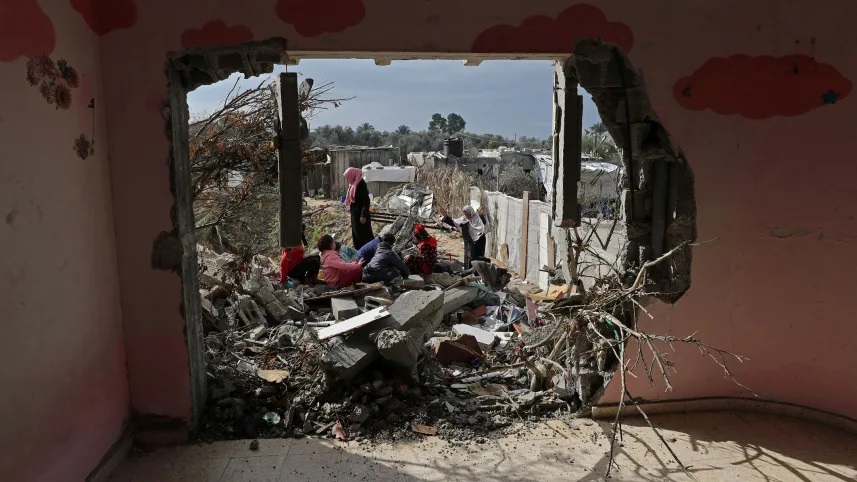 It’s good that kings, presidents and other notables came here in honor of this remembrance day. It’s deplorable that they’re ignoring what the victims of the Holocaust are inflicting on another nation.

The city of Yerevan will never witness such an impressive gathering to commemorate the Armenian holocaust. World leaders will never come to Kigali to mark the genocide that happened in Rwanda. The Holocaust was indeed the greatest crime ever against humanity, but it was not the only one. But Jews and the state of Israel know well how to sanctify its memory as well as using it for their own purposes.

Like our page on Facebook
Follow us on Twitter
On this International Holocaust Remembrance Day, world leaders are the guests of an Israeli prime minister who, on the eve of their visit, called for sanctions – believe it or not – on the International Criminal Court in The Hague, which is a legacy of the courts that were set up to judge the crimes of World War II.

Donate us
On this Remembrance Day, world leaders are coming to a prime minister who is trying to incite them against the court in The Hague. It’s hard to think of a more galling use of the Holocaust, it’s hard to conceive of a bigger betrayal of its memory than the attempt to undermine the court in The Hague only because it wishes to fulfill its role and investigate Jerusalem. The guests will hold their silence on this issue as well. Some of them may be persuaded that the problem is in The Hague, not in Jerusalem. Sanctions on the court instead of on the occupying state.

One must never forget the Holocaust, obviously. One must also not blur the fact that it was directed against the Jewish people. But precisely for this very reason one must not ignore the conduct of its victims toward the secondary victims of the Jews’ Holocaust, the Palestinian people. Without the Holocaust they would not have lost their land, and would not be imprisoned today in a gigantic concentration camp in Gaza or living under a brutal military occupation in the West Bank.

When today they recite ad nauseam “never again,” one should cast one’s eyes honestly to the south and east, only a few kilometers away from the memorial hall at Yad Vashem. There’s no holocaust there, only apartheid. No annihilation, but a systematic brutalization of a nation. Not Auschwitz, but Gaza. How can one ignore this on International Holocaust Remembrance Day?

It’s hard to believe that it didn’t occur to even one world leader who came to Jerusalem to travel to Gaza after the ceremony. If one of them had the courage to do so, he or she would be honoring the memory of the Holocaust no less than by visiting Yad Vashem. There aren’t many places around the world where the words “never again” should resonate as much as within the confines of this huge ghetto, created by the state of Holocaust survivors. Not to go to Gaza and see what’s happening there? Not to identify with the fate of two million human beings who’ve been locked in a concentration camp for 14 years, one hour away from Jerusalem? How is that possible? Not to cry “never again” in Gaza? How can they not?

A few leaders ostensibly balanced their visit here with a brief and ceremonial visit to Ramallah, including a photo-op with Mahmoud Abbas, who is also a target of Israel’s protests. This kind of visit has no significance. Ramallah does not determine the fate of the Palestinian people. It is determined in the government compound in Jerusalem and in the defense establishment compound in Tel Aviv. One needed to come to Israel today to remind the world of the Holocaust, but of the silence as well. Against this silence one should also cry out: Never again.

The Holocaust may never repeat itself, but the embarrassing silence continues, including on this day of remembrance in Jerusalem.